I need to be honest. I’m not really looking forward to this portion of my Simplify series. I actually intended on waiting until later in the year to this, so I could just keep on eating the crap I’m addicted to. But, part of my team is doing a cleanse right now, which really just includes clean eating and a few doTERRA supplements. I know these things are usually easier when done in a community, so I wanted to jump on this opportunity.

Now, I’m not doing the “cleanse” part. Even though doTERRA provides a very gentle and safe cleanse, it’s not recommended while pregnant or nursing. Your body already has a high demand during pregnancy and breastfeeding, so there is no need to cause any additional stress. Although, I do have to say, I take doTERRA’s Lifelong Vitality pack as my pre and postnatal multivitamin and I’ve had amazing results.

So, what does this month look like for me? Basically, I’m going to simplify my food choices. If I can’t pronounce it, I won’t eat it. If it came from a cow, I won’t eat it. If it’s made in a lab (think: refined flours and sugar/sweeteners), I won’t eat it. BUT what I will do is eat more vegetables and fruits. I will eat more Godmade food, and take out the manmade foods. I will explore different grains other than flour. I will try new recipes, and create new habits.

I actually started this on January 29th so I could make it a solid 30 days, instead of a random 28. Why does February only have 28 days? I just liked the way 30 sounded better than 28. I know, I’m weird. All that to say, it’s been 10 days of clean eating.

Giving up sugar was the most difficult during the first 3 days. After that, my mind just switched to FEED ME ALL THE BREAD. I’ve realized much of what I eat on a daily basis is just habit. Normally when I make the kids’ sandwiches, I’ll eat a bite of it. When I put pretzels in a snack bag for them, I’ll take a couple for myself. (I may have spit one out the other day when I realized what I was doing!) I eat pasta at least once a week because it’s convenient and I have a homemade tomato sauce we all love. I got used to eating a flour tortilla while cooking tacos. I made a habit of always eating a bowl of cereal at night because I felt like I deserved it at the end of the day. So much refined flour. Hello, my name is Amanda, and I am a bread junkie.

I’ve made some changes now that are becoming my habit. I’ve stopped packing as much grains for my kids’ lunches. Now it’s not a sandwich and pretzels, it’s a sandwich and an apple or orange. I make zoodles for myself instead of traditional pasta noodles. Instead of eating flour tortillas, I eat the clean taco toppings (ground turkey or black beans, pico de gallo, and guac… so good!) on a bed of greens. They’re small changes, but that’s how change happens. I’m creating new habits. It’s not perfect, but it’s progress. 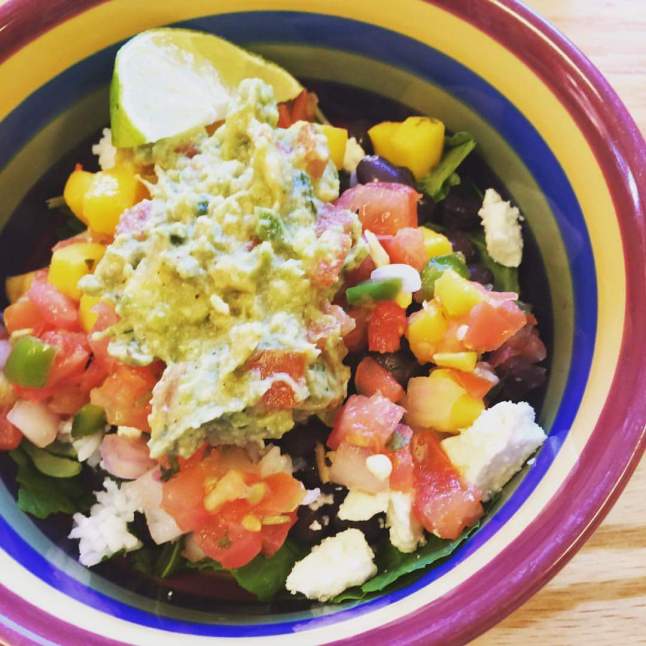 Cutting out dairy has not really been a challenge, although I totally spaced during the Super Bowl and put cheese on my chili. I also forgot last week and tried a sample of Fro Yo, then thought Why does this taste like heaven? Then I remembered I hadn’t had sugar or dairy in days. Don’t worry though, I didn’t eat a cup! I threw away the unfinished sample, and tried to ignore my mind screaming at me to eat the freakin fro yo while everyone around me enjoyed it.

I’m pretty excited to see what’s to come. I’m already noticing small changes for the better. I’m not craving sugar nearly as often. Usually I don’t want it unless I see it. My mind is still obsessed with bread, but I’m hopeful that this will change as well. I’m excited to try different grains and create new habits. Stay tuned for another update soon!

Have you gone gluten free? Sugar free? Dairy free? Share some success tips with us!

2. Speaking of caffeine, our electric coffee grinder broke the other day and I was desperate for some coffee. One of my sisters had given me an antique manual coffee grinder as a bridesmaid gift, and we really weren’t expect it to work. Well, I dusted that puppy off and figured out how to grind coffee with it! It was a great accomplishment. Plus, look how cool it will look on the counter? And that’s coming from someone who doesn’t like things on her kitchen counters.

3. The weather here has been gorgeous lately. We’ve been spending lots of time outside, and my boys love to pick ALL the flowers they can find. They are so sweet and picked flowers for me, their dad, baby Sarah, Nana, Pops, Grandma, Grandpa, and the mailman.

4. This past Saturday I did yoga for the first time in years. I used to think that yoga was this easy peesy workout… Y’all, the next day there were muscles hurting that I didn’t even know I had. If you wanna get ripped, go to yoga.

5. Speaking of yoga, have you ever tried using essential oils along with your routine? I wanted to be able to come with a clear mind, and not be worrying about the stresses of life. I rolled doTERRA InTune on my wrists and it really helped to keep me grounded.

🪺 Mockingbird Eggs 🪺
I loved my job. Primarily, my job as a LSSP consisted of testing students to see if they qualified (or continue to qualify) for Special Education services. These services could provide students with accommodations and modifications to help them THRIVE in school. I loved testing students and knowing I was part of that process. Again, I loved my job… until I didn’t.
🎉 LSSP 🎉
I can’t believe summer is coming to an end... my kiddos start school on MONDAY 😫 How is this possible?! Lol
It’s World Breastfeeding Week! 🤱 This picture is a throwback to my nursing days a few years ago.
I was able to go running last night for the first time in two weeks! 🏃‍♀️ It was nice to hit the trails at camp... and see the bunnies and birds. (Y’all know I’m a sucker for flowers and wildlife. I WILL stop to hang out with the bunnies until they hop away 😆🐰)